With an initial production run of 4,000 tablets already sold, Surtab plans to increase its output to 7,000 a month 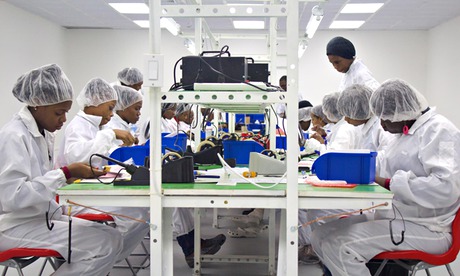 The stark and sterile white room in an industrial park in Port-au-Prince is a world away from the chaos and colour of the annual carnival, but both are being touted as part of a new “Made in Haiti” brand.

The clean room, to use its official name, is a 2,000 sq ft space where Haiti’s first tablet computers are assembled. There are three models of the Surtab Android tablets, the most expensive of which is not dissimilar to an iPad Mini or Samsung Galaxy – but at half the price.

“They show that Haiti can do hi-tech manufacturing and assembly,” says Maarten Boute, Surtab’s Belgian CEO and co-founder. “Everyone knows Haiti, but for the wrong reasons. Now, Surtab associates the Haiti brand with something cool.”

At $100 (£60) plus local taxes for the cheapest model and $285 for the high-definition Surtab 7, the Haitian tablet is an oddity in a country better known for hunger, extreme poverty and near-mediaeval healthcare.

The Danish philanthropist JP Bak came with the idea as a jobs-creation scheme while he was working in Haiti after the 2010 earthquake, Boute says, but the trigger was an acquaintance of JP that gave him the idea the much-hyped low-cost Aakash tablet manufactured in India. “We thought, why can’t we do the same here? Using components bought in Asia, just like Apple and other companies?”

Boute says the competitive advantage lies in geography and relatively low labour costs. “Microsoft Trinidad wants a low-cost tablet for the Caribbean region. We’re at the same wage level as China even though we pay the workers at least twice if not four times the [Haitian] minimum wage,” he says.

Surtab comes at a symbolically significant time for Haiti. As of this year, a UN international force will have been keeping the peace on the island for a decade; agricultural productivity was marginally higher last year, staving off food shortages in the hinterland; 30 months after taking office, President Michel Martelly’s government is finally talking to the opposition about holding long-delayed elections during 2014. The Catholic church is leading the negotiations , newly emboldened by Pope Francis’s decision to give Haiti its first cardinal.

“It feels like the clouds are lifting, just a bit,” says Marcus Garcia, who edits the diaspora weekly Haiti en Marche from Port-au-Prince.

To some, Surtab symbolises a nascent and unfamiliar sense of Haiti on the move. Boute and the Haitian businessman Richard Coles invested capital and the company was supported by a $200,000 USAid grant through the Pan-American Development Fund to get the company on its feet.

It was a sizeable investment of faith as much as money in an energy-deficient country, where the cost of doing business is high and which, according to Transparency International, is one of the most corrupt places in the world.

Not everyone is convinced by Surtab’s vision. “It sounds wonderful, but this is not mass jobs creation. It’s just a few jobs. Haiti needs thousands, hundreds of thousands of jobs,” says a prominent Port-au-Prince businessman who spoke on condition of anonymity. For this, the government would have to pass new corruption laws, enforce existing laws and create an investment-friendly climate. “That’s how the Dominican Republic, Barbados and Mauritius have done it,” he says.

Garcia agrees. “We are a broken country and to remake ourselves, we need jobs. Lots of jobs.”

Unsurprisingly, the logistics of setting up tablet production in Haiti were a great deal more complicated than securing the startup funding. Haitian workers had to be hired and trained for two months, and in a canny move to circumvent the national disclaimer of pa faut mwen, Haitian Creole for “not my fault”, Surtab has ensured that its staff take responsibility for their work by dispensing with the traditional assembly line and having each worker create tablets from start to finish.

The fastest workers assemble 15 tablets a day, and the company has shipped 650 to a Kenyan university and 220 to an educational foundation in Jamaica. The remainder of the initial production run of 4,000 have been sold at home, to the government and NGOs and through the mobile phone company Digicel’s 116 Haitian outlets.

With bank loans to cover the cost of increasing production quotas, Boute plans to turn out 7,000 tablets a month. His target market includes an estimated 500,000 Haitians, and he says the tablet business is a safe bet even if Surtab fails to make it as a standalone brand.

No comments so far.